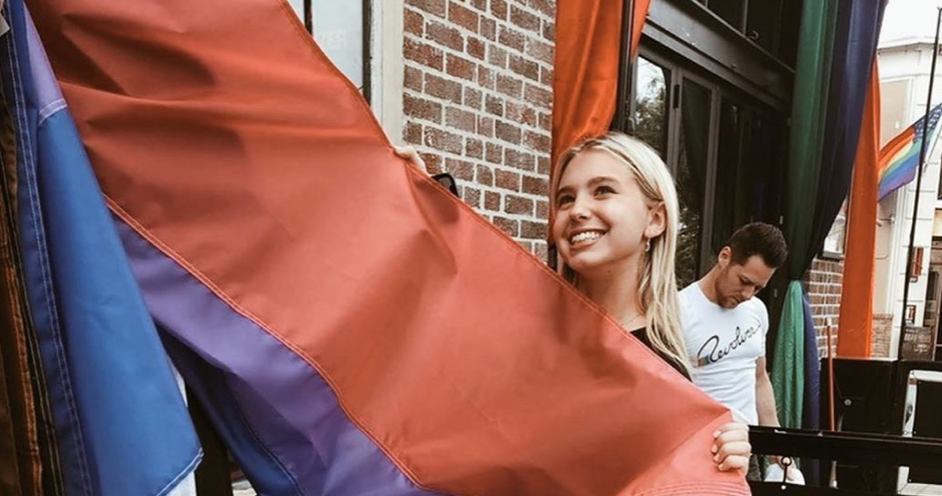 Happy Pride month! In honour of this, we’re celebrating some of our fave young members of the LGBTQ+ community to follow on Insta. Whether you’re part of the community yourself, or you’d like to be a more informed, educated, better ally to LGBTQ+ people around you, following some fabulous advocates and influencers is one of the easiest ways to celebrate Pride month.

The 17-year-old dancer, actress, author, influencer and model, wears many hats in the entertainment industry. Lilia always ensures she uses her platform for the right reasons and has always been open about the importance of mental health and being yourself. Her Instagram feed is full of positive vibes, fashion inspo and adorable pics of herself and her girlfriend, actress and singer Jillian Spaeder, as well as all their famous friends including the Dance Moms girls.

For your daily dose of sunshine give her a follow!

she painted flowers on me!!

Star of the reality show ‘I am Jazz’ which has followed journey as a trans teen, Jazz is an inspirational girl who uses her Insta to spread awareness, acceptance and visibility of the LGBTQ+ community. 19-year-old Jazz has recently been named on the 20 young LGBTQ+ people under 20 who are shaping the future of media and activism, presented by Teen Vogue and Glaad. A super inspiring person to add to your feed.

The 19-year-old daughter of Will Smith and Jada Pinkett Smith, Willow has made her own name for herself in the world from her music, to her strong ability to spread a message and communicate, which is evident on her show with her mother and grandmother ‘Red Table Talk’, Willow’s honesty is admirable and the conversations that are brought up for discussion are inspiring and emotional. Willow has been very open about her sexuality and mental health over the years, admitting she has gone through some very dark times growing up in the spotlight, as well as saying that she is attracted to both men and women equally. Willow’s Instagram contains a mix of her music, fan art, educational information and petitions for important causes.

The 21-year-old actress who played Rue in The Hunger Games is all about being who you are. In an article with Wonderland in 2018 Amandla discussed their sexuality and pride, and has previously said that they prefer the pronouns they/their. Still absolutely slaying the acting game as well as being an ambassador for Fenty Beauty and spreading awareness and information on important causes Amandla’s Intsa is worth a follow. We can’t wait to see where their future goes.

Trevi Moran first rose to fame on the X-Factor USA in 2013 when she auditioned at the age of 13. Trevi then had a very successful Youtube career with 1.44 million subscribers. She released a video coming out as a transgender woman in early June and has been “overwhelmed with love and support” since. 21-year-old Trevi is looking fabulous on her gram and has just announced a brand new single called Cheers which will be released on June 30th. We love to see people following their dreams!

First day out as a trans woman… pretty cool shit 💅🏻

Irish singer/song-writer Luz is quickly blowing up on the music scene at just 18, with Dua Lipa already reacting to one of her covers and being interviewed on 4 music, things are going well for this homegrown talent. Luz began her career posting anonymous covers online, but since going all in her success is only rising, her cover of Dua Lipa’s Don’t Start Now currently has 1.5 million views on YouTube. Luz posts many covers and snippets of songs on her Instagram, the pride flag hanging proudly in the back of her vids. We know this girl is going to go far, her new single ‘We’ll be fine’ is out now and has over 220K streams in 3 days! Definitely one to watch so get following now.

Everyone knows this sister, James is always posting amazing makeup looks on Instagram, as well as content with his famous friends such as Addison Rae and Charli D’Amelio. James is all about being yourself and loves to express himself with makeup and clothes and loves colourful looks. If you’re in need of some rainbow makeup inspo James is your guy!

Josie is a transgender actress who has guest-starred in shows such as Jessie and Glee, along with others on her impressive resume. Josie has told TIME.com how, before coming out as transgender she felt boxed in in the entertainment industry as a “young gay man” and although she said that she understood why people assumed her identity, she felt it was important not to hide her true self. Josie now is excited to play female roles as it’s what she always wanted, Josie is playing the character of Lexi in the reboot of ‘Saved By The Bell’ which is set to be released in July.

#forbes30under30 issue is out next week. I am so insanely grateful to be among this incredible group of people. I’ve always dreamt of this, but was told from the very beginning I was an average student, my test scores sucked, and the only thing I was good at was getting myself in trouble. but I always had my family supporting me and I never gave up. So here’s to all the colleges that denied me last spring. believe in yourself ❤️

Hype House member and YouTube star Larray, has just hit 3.1 million followers on Instagram and has over 5 million subscribers on YouTube. Larray’s YouTube videos often feature other TikTok and YouTube stars such as the Dolan Twins and members of the Hype House. He was dating influencer Brady Potter up until May but the pair haven’t posted together in a while, so fans are unsure of their current status. Larray’s merch, is called Girliesxo and, of course, is popular among his famous friends including James Charles! If you love TikTok and want to get to know some Hype House members better, get following!

Another Smith child who is breaking boundaries, Jaden has been testing gender boundaries in fashion for years and has also come out as gay with rumours swirling that he is dating Tyler the Creator for a few years now, Jaden has even openly called him his “boyfriend”, but there still seems to be a question mark over the two’s relationship. Jaden is known for his gender-fluid style, wearing a skirt in a Louis Vuitton campaign in 2016 and also to Amandla Stenberg’s high school prom. He has his own gender-fluid clothing brand called MSFTSREP which he wants anyone to be able to wear. Jaden also releases music which takes over his Instagram page with blown up reveals of pictures on his grid.

We are sure there are plenty more members of the LGBTQ+ community out there that we all should be following, these are just a few of the inspiring and creative people out there. So what are you waiting for? Brighten up your feed!