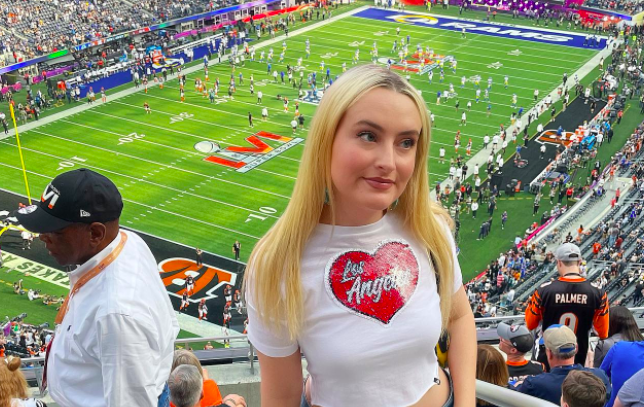 Whether you know her from TikTok, Youtube or elsewhere, Amelia is blowing up run. Between her extremely popular Youtube, show Chicken Shop Date and recent rumoured *thing* with rapper Aitch, Amelia has plenty to keep her busy.

She’s always authentically herself and seems to bring out the most in the person she’s interviewing. Her recent chat with documentary maker Louis Theroux went viral when he sang his ‘rap’ with her, securing her place as one of the most down-to-earth people on social media.

We’ve done a little deep-dive on Amelia and are bringing you 10 things you may not have known about her.

1. She and Aitch are besties

After the two had their very successful Chicken Shop Date 2 years ago, they reunited a couple of months ago in a flirty exchange at the Brits this year. Since the reunion the two were very active on social media with one another, posting TikToks on dates, flirty Instagram captions, etc and tbh we were eating it up.

Recently, Aitch opened up to Mail Online, about their relationship and keeping it private. Sadly though, Amelia posted on her TikTok account recently to share that the two were better off as friends. To prove it they even bought matching best friend bracelets!

Born on the 30th of January, Amelia is an Aquarius baby. As this air sign, Amelia not only lives her life with a light outlook, she is extremely independent. This definitely comes across in her interviews because she never backs into a corner and always stands her ground with confidence no matter who she’s dealing with.

3. She has a fashion degree

Not many people know Amelia is actually a journalist. When she graduated secondary school, she attended Central Saint Martins in London. During her time there she received a diploma in art and design and a BA in fashion communication. She really is a woman of many talents.

4. She started Chicken Shop Date how long ago?

Even though the show has really only taken off the last couple of years, Amelia has been doing Chicken Shop Dates for 8 years. She started the show on her Youtube on her own accord and began the production, filming, and, organisation of the show all by herself. A true girl boss moment to start all of that without any help or team – we’re taking notes.

5. Her favourite person to interview was…

In an interview with Cosmopolitan, Amelia shared that she has two fave past guests. She initially said Jack Harlow, but then said that she goes between Jack and Aitch.

Hmm, we wonder why Aith was one of her favourites? *wink wink*

At the Brit awards, Amelia was set to interview many celebs attending the show. Throughout the interview process, Amelia brought what she said was her lucky egg. It was an egg, in a cup that had ‘lucky egg’ written on the cup. And for whatever reason it was lucky?

She asked certain celebs like Sam Fender if he would like to rub the lucky egg. He, of course, did it with some hesitation but did it nonetheless. And it gave us a laugh so what more could you want?

7. This is her dream interview

When asked who her dream guest on Chicken Shop Date would be, Amelia, without missing a beat said Doja Cat. Imagine how chaotic and hilarious that would be? Petition to make this happen.

When asked what her least favourite interview was, she said it wasn’t necessarily her worst Chicken Shop Date but it definitely was one that went wrong. Her interview with KSI apparently went bottom up because they filmed the whole thing, it went really well and then something happened to the footage and they had to reshoot the whole interview.

For that reason, Amelia was disappointed to miss out on showing fans the authentic interview.

9. Her skincare secret is…

She revealed that her favourite skincare product is the Olay Vitamin C and AHA 24 cream. She says that she always feels like she’s glowing when she uses and if her Instagram is anything to go by, we can see what she means *adds straight to shopping basket*.

10. She is all about making the first move

Talking to Cosmo, Amelia said her best piece of dating advice is to make the first move. You don’t want or have to be waiting around for someone to ask you out when you could just move first. We are all about shooting your shot so this bit of advice gets the KISS seal of approval!