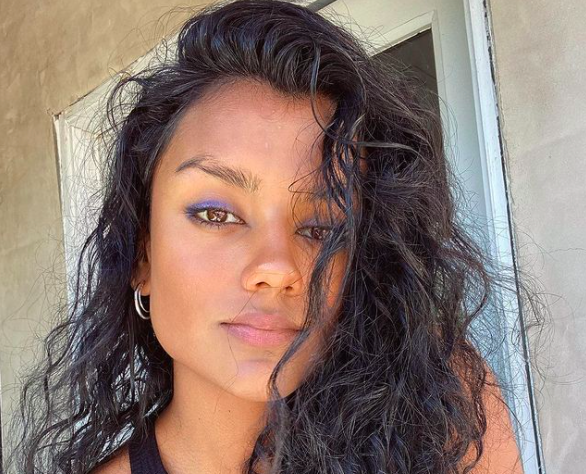 Simone Ashley is a British actress you may know from Netflix show Sex Education, but she’s also just broken out as this season’s lead in Bridgerton.

So now that you’ve seen her in the land of ton’, why not get to know her a little better IRL too? And if you’re interested in any more Bridgerton stars, we have some more facts on Daphne Bridgerton actor  Phoebe Dynevor and Lady Whistledown herself, Nicola Coughlan!

But for now, here are 10 things you probably didn’t know about Simone Ashley!

1. You’ve seen her in another Netflix show

If you’re wondering where you’ve seen Simone before, it was probably another hit Netflix show.

Simone has already starred in another extremely popular Sex Education as Olivia Hanan. She has been in the show since it started and we are hoping that she will be back for the renewed 4th season.

Now that she’ll be the leading lady in the new season of Bridgerton at the end of March, we’re interested to see how she’ll perform differently from her fun portrayal of Olivia.

2. She’s very passionate about being typecast

Simone has been very vocal about her opinions on typecasting and how it has affected her career.

Landing her role in Bridgerton is breaking down those struggles and could be a big change for issues around typecasting. She spoke on colourism and how frustrating it can be to only be cast to be ‘relatable’ to a certain audience and their skin colour.

She wanted to break down those barriers. And she has done exactly that with her upcoming role.

“I really believe in myself and in other dark-skinned women, especially South Asian women! We are smart, we are talented and we all have something special to offer as artists!”

3. Her dad inspired her to start acting

While having come from quite a strict family who would try to have her shy away from being creative, it was Simone’s dad who gave her the inspiration to pursue a career in acting!

Her dad had such a passion for music and would let her embrace her creativity around the house instead of trying to bottle it up. And it was a great thing for her to use as an escape from expectations, having not been very academic growing up.

Anyone else grateful for Simone’s dad for giving her the inspiration because without him she may not even be acting now!

Her dad’s love for music most definitely rubbed off Simone growing up because she is very into music!

She will listen to anything and everything and says she has a special love for Rock n’ Roll because that’s what she grew up listening to the most. Having given examples like Fleetwood Mac and The Doors, we know that we could safely pass Simone the aux and she would only play absolute bangers!

As a fire sign, Simone would be more likely to think fully after she’s made a decision and be quite spontaneous. She definitely seems very headstrong in the best way possible and this gives off major fire sign energy.

Aries’ are able to just leap into a situation and take control of the outcome, and given Simone’s boldness when it comes to taking on a role, we’re fully convinced she lives up to her sign!

Simone is coming in at a height of 5ft 10in and we are so here for it!

2022 is all about tall girl energy. Embrace your height! We already have our tall it-gals like Zendeya and Taylor Swift, we need more names to add to the list.

It’s all about representation so if you’re tall like Simone, know you’re in god company!

We love an independent woman and Simone is serving when it comes to independence.

There have been no sightings of Simone with anyone she could be dating and has not been on the record talking about anyone special. So she is either single (slay) or keeping a relationship on the down-low to avoid any kind of hassle about it (also slay!).

All we know is we are dying to see her on-screen relationship in this season of Bridgerton!

8. She comes from a traditional Indian family

Simone says her parents come from a very traditional Indian background, and so she was raised the same.

She spoke about how growing up and expressing her want to work in the creative field worried he parents as it had no real security behind it.

Even though they had these views, her parents were still very supportive of her career choice and, as we mentioned above, her dad was the one who gave her the inspiration to be in a creative field in the first place.

Simone was recently the cover star of Vogue Singapore.

She shared pictures from the stunning shoot on her Insta and having looked at the rest of the shoot, we can safely say we’re obsessed!

She has also had an interview in the issue where she speaks on Bridgerton, Sex Education and how her new role came about.

10. She’s going to be all about Anthony in Bridgerton season 2

If you haven’t yet watched season 2, or you’re unsure if you even want to, allow us to convince you. In the show, Simone will play the role of Kate Sharma (originally Kate Sheffield in the books) and her love story will be the main focus of this season. In the series, we get to see her fall for Anthony Bridgerton, and the chemistry is 10/10.