You might know Olivia Rodrigo as the star of High School Musical: The Musical: The Series or maybe you know her because of her incredible voice and powerful songs. Maybe you’ve seen her on TikTok, and you’ve almost definitely read up on her Driver’s License drama.

But let’s get to know Olivia for real. Here are 10 things you probably didn’t know about her.

She is of Filipino descent

Though Olivia grew up in California, her grandfather was Filipino and they held on to lots of the traditions including the food and her father speaking Tagalog. On her mother’s side, she’s German and Irish (woo!).

She is an Aquarius

Liv was born on February 20th, 2003 making her an Aquarius. This would make her independent and intelligent, but this sign can also mean you’re pretty stubborn and unpredictable.

Her biggest crush is Harry Styles

Join the queue sis! The star even held a huge cardboard cutout of him at his Hollywood Bowl concert.

She wrote some songs for HSM

Olivia is only 17 but she’s super talented already and even co-wrote All I Want with co-star (and possible ex?) Joshua Bassett.

When speaking to KISS last year, she revealed she does feel similar to her High School Musical character:  “I think that I’m really like Nini a lot. I think that Nini is so well written as just like a teenage girl that’s growing up and finding herself amidst all of this craziness. And I think that I was just totally a teenage girl trying to find a place in the world to while I was filming it, I remember was really easy to write ‘All I Want’ because I drew on my own experiences with romance, like when you’re 16 and dealing with boys in high school, so I drew on a lot of my experience to write that song. And I think that just goes to show how relatable the character is to me and I think a lot of other girls.”

Ever look at a celeb a think ‘I have no idea why but I feel like they’re really tall’ or really small? Well, Olivia is basically the average height for a woman, so now you know! 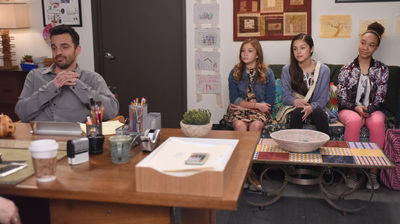 While she’s best known for HSM:TM:TS, she acted before this, and one that we were shook about is New Girl. In season 6, episode 18 which is called ‘Young Adult’, Olivia plays the role of Terrinea, one of Jess’s students.

She is a huge fan of Taylor Swift and Lorde

Two of her biggest icons are Tay-Tay and Lorde. She regularly posts about both singers on her Instagram and recently Taylor praised her for Driver’s License writing: “I say that’s my baby and I’m proud”.

She’s actually a singer first and foremost, having been singing since she was just 4. Olivia took up acting based on a recommendation from her vocal coach. “Acting and music relate in that they are both about capturing feelings and moments as accurately as you can,” she revealed.

She doesn’t see herself as super famous

In her interview with KISS, she explained:  “I’m just so lucky to be doing what I love every day. And I’m so happy that people are resonating with the stories that we’re telling. But like, I feel at the end of the day, I’m still just like doing algebra in my bedroom. You know, like, that’s just me. So I don’t think our lives are gonna change drastically.” This was clearly before the show took off, and before her song Driver’s License, so maybe that answer will change next time we chat to her!

Check out more 10 Things about your fave celebs