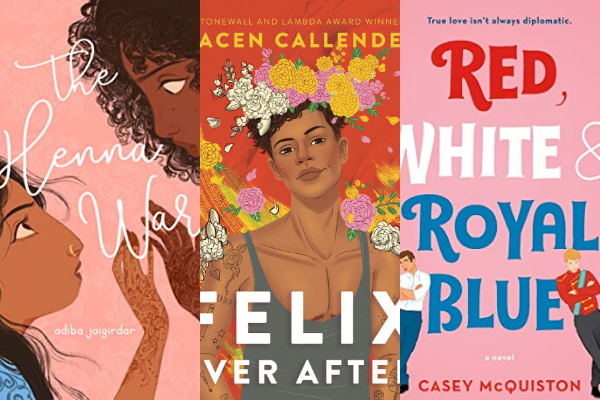 When you read a book, you get transported to another land, another time, and most importantly another’s mind. Picking up a book is the easiest way for anyone to understand another person’s experiences and point of view.

How many times have you read a novel or autobiography and for a second completely forgot who you are? I know I have! This is why it’s so important to read stories that are outside of our own experience. If you are white, straight, cis-female, etc it can be easy to get caught up reading books where the main character is all of the above, because it’s familiar to us.

The bad thing about doing this is that it cuts you off from so many amazing stories that are out there just waiting to be read. As we all know, it’s pride month. so what better way to celebrate it than adding some LGBTQ+ books to our bookshelves?!

While there are so many factual reads out there for us to read, sometimes sitting down to a fiction novel is exactly what we need to escape the world for a while, especially during the summer holidays.

So, with that in mind, we’ve rounded up 5 YA LGBTQ+ friendly novels to add to your summer TBR pile.

Red, White, and Royal Blue tells the story of how America’s first son falls in love with the Prince Of Wales.

“Heads of the family and state and other handlers devise a plan for damage control: Stage a truce between the two rivals. What at first begins as a fake, Instagrammable friendship grows deeper, and more dangerous, than either Alex or Henry could have imagined. Soon Alex finds himself hurtling into a secret romance with a surprisingly unstuffy Henry that could derail the presidential campaign and upend two nations. It raises the question: Can love save the world after all?”

Irish gal Adiba Jaigirdar’s debut novel, The Henna Wars explores what it is to be both Muslim and gay. Following the complicated love story between Nishat and Flávia, two teen girls with rival henna businesses and very different backgrounds.

“When Nishat comes out to her parents, they say she can be anyone she wants—as long as she isn’t herself. Because Muslim girls aren’t lesbians. Nishat doesn’t want to hide who she is, but she also doesn’t want to lose her relationship with her family. And her life only gets harder once a childhood friend walks back into her life.”

Felix Ever After – Kacen Callen

Although his last name is Love, Felix Love has never actually been in love. This novel is a hugely important read for anyone who has experienced or wants to understand transphobia. It follows the story of main character Felix as he navigates his life as a black, queer, and transgender teen, all in search of his very own ‘happily ever after’.

“When an anonymous student begins sending him transphobic messages—after publicly posting Felix’s deadname alongside images of him before he transitioned—Felix comes up with a plan for revenge. What he didn’t count on: his catfish scenario landing him in a quasi–love triangle. But as he navigates his complicated feelings, Felix begins a journey of questioning and self-discovery that helps redefine his most important relationship: how he feels about himself.”

The Falling In Love Montage follows two girls, 17-year-old Saoirse and Ruby as they embark on a summer-long of picture-perfect dates. With Saoirse not necessarily looking for anything too serious, she soon changes her mind when she meets Ruby, the girl of her dreams.

“Unbothered by Saoirse’s no-relationships rulebook, Ruby proposes a loophole: They don’t need true love to have one summer of fun, complete with every cliché, rom-com montage-worthy date they can dream up—and a binding agreement to end their romance come fall. It would be the perfect plan, if they weren’t forgetting one thing about the Falling in Love Montage: when it’s over, the characters actually fall in love… for real.”

A little different from the novels listed above, PET is Awaeke’s debut YA book, and follows the story of Jam, a trans girl who finds out her mother’s artwork has unleashed a monster (literally).

“When Jam meets Pet, a creature made of horns and colours and claws, who emerges from one of her mother’s paintings and a drop of Jam’s blood, she must reconsider what she’s been told. Pet has come to hunt a monster, and the shadow of something grim lurks in Redemption’s house. Jam must fight not only to protect her best friend, but also to uncover the truth and the answer to the question- How do you save the world from monsters if no one will admit they exist?”