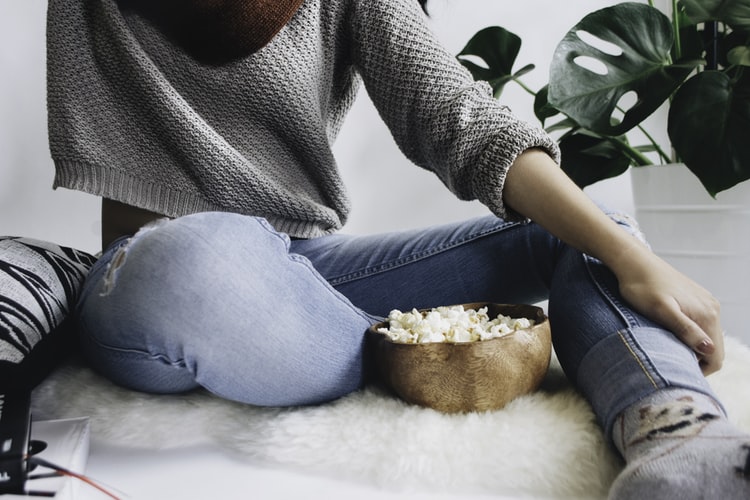 You’ve probably binged your way through some of these already, but sometimes there’s something comforting about rewatching a really good show, right? So get the popcorn ready, and take some time to chill out. Go on, you deserve it.

To be honest, there are few shows that are more feel-good than Queer Eye, right? We need the fab five in our lives right now to brighten things up a bit. From Karamo’s positive chats to JVN’s hair transformations, it’s the ideal show to watch right now. Plus, the countdown is on for the next season, so that’s something else to look forward to too.

Okay so The Good Place may technically be about death and the afterlife, but it’s done in a way that won’t freak you out, despite the news of the world right now. We promise! The Good Place follows the story of Eleanor, who finds herself in heaven after an accident, but she’s pretty sure that she doesn’t belong there. It’s the kind of show that you can switch on, so you can switch off. Which is kind of what we need right now, right?

Dog content will always make us smile, whether it’s on TikTok, Instagram, in real life or on Netflix. Just give us all the doggo content, please. Dogs is a docuseries that celebrates the bonds between people and their beloved four-legged buddies. The show profiles dogs and their owners from all around the world, and it’s a must-watch.

The Great British Bake Off

From crispy croissants and spiced biscuits to real-life portraits and tiered cakes – what’s not to love about GBBO? Almost all the seasons are living on Netflix right now, and it might even give us some inspiration to try our hands at baking while we’ve got the time.

When Derry Girls first aired on our screens, it won over everyone, and for plenty of good reasons too. This is your go-to show when you feel like you really need a good LOL, it’s heartwarming, uplifting, and may even bring a few wee tears too. If you haven’t watched it yet, add it to your list right now and settle in for a good time.

If you’ve been reading KISS for a while (thanks for that!) you’ll know that we’re pretty big fans of Brooklyn Nine-Nine. A team of detectives in Brooklyn doesn’t know how to take things when there’s a new captain in charge, and things tend to get pretty hectic. At this stage, we’re finding it hard to pick a favourite, from Doug Judy to Captain Holt, the decision is too much.

After being rescued from an underground life after being kidnapped, Kimmy Schmidt heads to New York to live that fantastic New York experience, along with her new roommate Titus, who’s trying to make it as a Broadway actor. The pair are sure to bring a smile to your face.

A post shared by Kimpossible (@unbreakablekimmyschmidt) on May 8, 2019 at 6:18pm PDT

Read Next: You Have To Watch The Stranger Things Cast Doing Their Own Carpool Karaoke