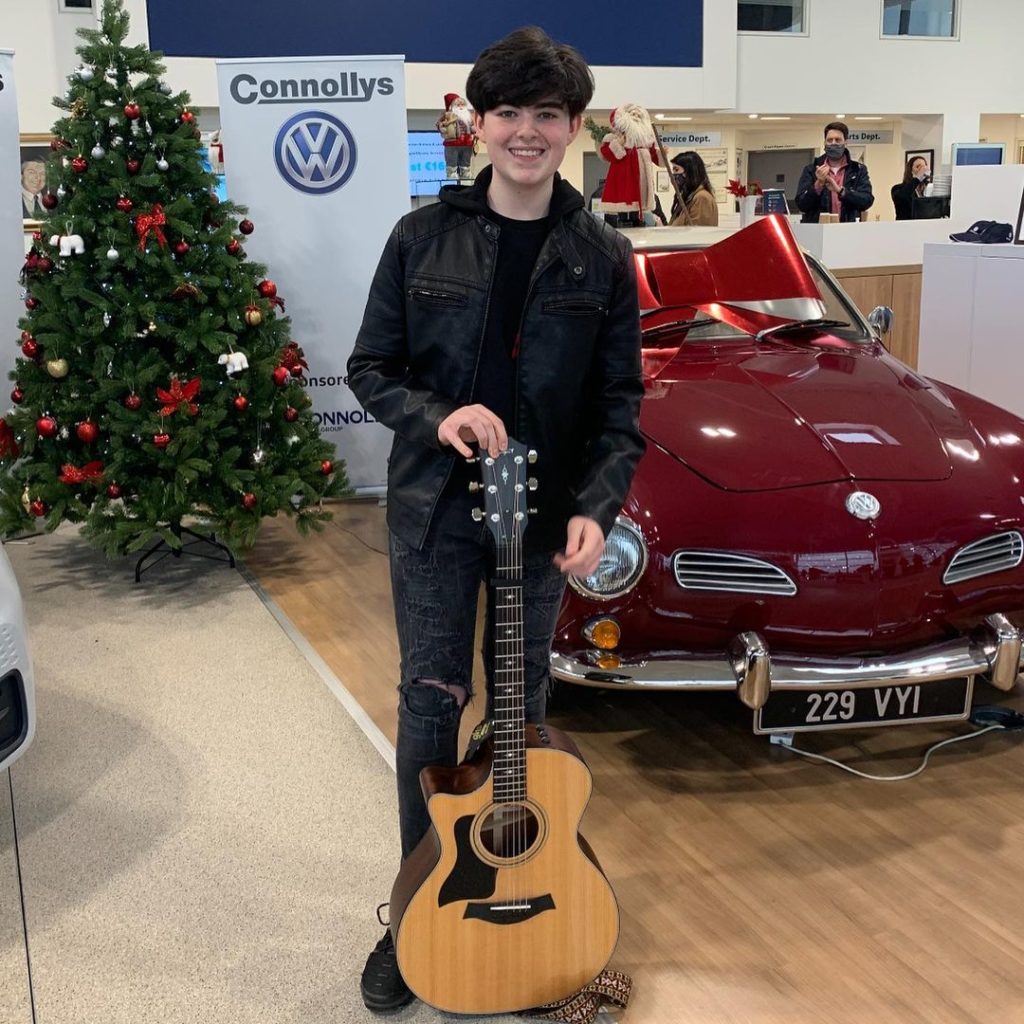 Back in November, all eyes were on the Late Late Toy Show where so many magical memorable moments took place. One of the most talked-about parts of the night was when singer Michael Moloney blew viewers away with his rendition of Giants by Dermot Kennedy, who then surprised him by joining him on stage!

Michael instantly gained thousands of new fans and has been posting songs on his social media ever since.

We caught up with Michael to talk about the special moment and to get to know him a little better with our 7 Questions.

“Well my mum had been meaning to enter me but didn’t get around to it ’til just the day before the closing date, it was a Sunday evening and we spent about two hours trying different songs and different takes, and finally sent it in on a wing and a prayer! When we heard back from RTE at the end of our midterm break, people probably could have heard us from all over the globe, shouting with excitement,” Michael reveals.

“We literally could not believe we had got a second audition and we were on the phone immediately telling all our friends and family. A number of weeks passed and we had not heard anything from them and had just assumed somebody else had been contacted and were happy for them, but we were still hanging tight to our excitement at having got a second audition, all hell broke loose the day it was revealed that I was going to be singing live on the Late Late Toy Show… and that’s putting it mildly!”

When Michael was joined by Dermot Kennedy on stage, you could see the delight and shock on his face. But proving his professionalism, he continued to play and sing flawlessly.

“To be honest I still cannot believe it all happened. When I started to sing the song I had no idea that Dermot Kennedy was anywhere in the vicinity! When he came out, for a split second I actually thought it was just his vocals on the backing track, but then they proceeded to get louder and I turned around and there he was, my idol, standing on the stage of the late late show, singing live with me!”

When it came to keeping his cool, the 14-year-old explained: “I nearly died but I was on autopilot in the zone and so I had to keep singing, after all it isn’t every day you get to sing with your idol on live, national television! I also want to thank him for surprising me again in the VIP room after the show and presenting me with a beautiful, signed Fender guitar. It was an absolute honour and privilege and was without a doubt the best day of my life, the icing on the cake was when Windmill Lane kindly presented me with a recording voucher, that literally took the talk off me and that night simply could not have got any better and I am really looking forward to that day and I know my Dad was overseeing it all from a distance. I also really couldn’t thank everybody at RTE enough for choosing me and being so kind and helpful to me throughout it all, I’m not kidding when I say I miss them all!!”

So let’s get to know Michael a little better…

I am very passionate about making music and having fun whilst doing it. I am in the process of putting together my home studio so I can record music in better quality and start to record songs that I’ve written, I am over the moon with excitement so watch this space!

Who is your ultimate celeb crush?

Millie Bobby Brown, she’s a brilliant actor, she’s super funny and she seems like great craic…what’s not to like.

If you weren’t singing what job would you be doing?

If I wasn’t singing I would love to be composing music for film, tv shows and tv adverts or if not that I would love to animate tv shows or movies, when I was younger I was always making animations and flipbooks, I am still enthralled by them.

What’s the most embarrassing thing that’s ever happened to you?

Oh jeez, am I really to share this! Once me and my friend were doing a bean boozled challenge, and for those who don’t know it, it is a challenge where every second one of you eats a flavour of jelly bean and they can be either nice or disgusting and you don’t know until you are eating it, whilst we were doing the challenge, we were near the end of the box, which trust me was an achievement in itself, when my stomach could take no more and I threw up on her bed!!! Her mum had come and change the bed for her and I almost died with embarrassment.

Tell us a random fact about yourself!

I used to run a podcast when I was like 10 where I would talk about random topics which I put out on YouTube and you can still find to this day! That was a bit random but also fun. Another fact is that I actually have a close up picture of just me and president elect Joe Biden from when he visited Ballina in 2016, and he told me “this one is for the White House buddy.”

Who are the three people you look up to most?

I obviously love Dermot Kennedy of course, he can do no wrong in my books! He is a brilliant singer and I love his lyrics and melodies, he’s also just a super cool guy, I’m also a HUUUUUGGGEEEE Harry Potter fan and am in love with JK Rowling’s writing and storytelling and the characters she has created, and I look up to my Mum because I never know what harebrained ideas she will come up with next and I can always rely on her to cheer me up since we always have so much fun together.

Where do you hope to be in five years?

I’m hoping to be completing my first year in college, doing – lord knows what! But hopefully, something to do with music, I also hope to have recorded some of my own songs in windmill lane studios and have them released on Spotify, Apple Music, etc… I’m in final negotiations with Britains Got Talent who got in contact with me as a result of the show, so maybe that will have happened but at the minute it’s looking bleak because of Covid so who knows! I also love drama and stage and have completed a drama course with the gaiety theatre and so would be open to any opportunities in that line but it is just a thought. Overall I just want to be healthy, happy, making music and having fun with friends and family.

You can keep up to date with Michael on Instagram here.