Addison Rae has landed her first movie role, and it’s a pretty big one.

The TikTok star is set to star as a lead in a remake of a popular 90s rom-com.

She’s All That is getting a gender-flipped remake called He’s All That.

If you haven’t seen the OG movie, or need a recap; it follows a popular guy called Zach whose girlfriend leaves him for another guy. When his social status suffers, he decides to turn the school nerd Laney into a glam prom queen. 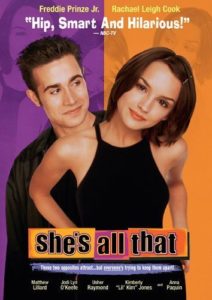 The remake, will flip this and see Addison playing the Zach character. She’s an influencer who’s boyfriend embarrasses her in front of the whole school. To get back at him, she decides to make one of the most unpopular guys in school, well, popular and make him prom king material.

Speaking about her role on the film, Addison said: “AHHHHH!!! My dreams are coming true!!! I’m so excited to finally share the news that I am getting the opportunity to make my acting debut in HE’S ALL THAT which is a remake of one of my all-time favourite movies, SHE’S ALL THAT.”

She went on to thank her fans for making it possible: “I’m so grateful for the opportunities that have been presented to me and none of it would have ever happened without every single one of you. I LOVE YOU ALL SO MUCH!! I can’t wait for you to see it! I can’t wait to work with this amazing team and everyone involved in making the film and am so thankful to everyone who gave me this incredible opportunity. THANK YOU!! I’m so excited for y’all to meet Padget!”

There’s no news on who will play the rest of the cast or when it’ll be released, but we’re excited to hear more.