Bryce Hall has expressed regret after lashing out on Twitter this week.

The TikTok star posted a number of tweets talking about being betrayed. 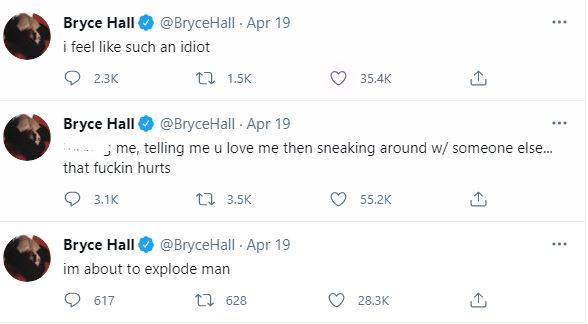 Many felt that the tweets were directed at Addison Rae, who he recently split from.

Addison and Bryce both attended the Jake Paul v Ben Askren fight in Atlanta and it was there that Addison was rumoured to have hooked up with Jack Harlow.

Following this outburst, Addison tweeted ‘I’m single’ in an effort to shut down these rumours.

Now though, Bryce has expressed regret over the tweets.

Speaking to Noah Beck in a recent video, Bryce said: “Everything that I put out there was acted out of anger, I was being stupid and immature and I felt like such a f*cking idiot.

“I shouldn’t have done that and It’s all my fault really, it’s not anyone else’s fault, I definitely wish I could take that back.”

When Noah asked him to elaborate what he wanted to take back, Bryce said: “The tweets and the whole situation in general…”

WHO COULD'VE SEEN THIS COMING: Bryce Hall reacts to Addison Rae allegedly dating Jack Harlow. Bryce says he regrets tweeting about the situation and adds, "I wish them the best, I wish everyone the best." pic.twitter.com/49d3d9Ojc7

In an attempt to talk about how he was feeling about the potential new couple, he said it’s “definitely one of my craziest heart hurts.”

Here’s hoping everyone stays civil and friendly regardless of who anyone is or isn’t dating.

Addison Rae Explains Why She Can Relate To Britney Spears