Charli D’Amelio is calling out body shamers again after comments about her friend Kouvr Annon were made on TikTok.

It kicked off when a TikTok talking about Kouvr’s body circulated on the app. Obviously this is super innapropriate, not to mention nasty, and Kouvr called it out.

In an Instagram story she shared a lengthy note saying:

“For a long time I’ve struggled with my body image and the way that I’ve looked,”

“I was never the ‘skinny’ girl and I never looked like any of my friends. It’s so hard to be confident in yourself and love yourself when the world tell you that [you’re] ‘fat’ or ‘ugly.’ I’ve always felt that I have never been [good] enough for anyone and when I looked in the mirror there was always something wrong.”

She added: “My stomach was too big, my thighs touched, my hair was too short, I wasn’t tall enough, I constantly hated the way I looked. It has taken me so long to finally look in the mirror and not absolutely hate myself.”

She also called out those who judge people based on; “the color of their skin, the shade of their body, or their height and size.” and said it goes “much deeper than that comment.”

“Please think before you take the time out of your day to tear someone down you could just as easily lift someone up.”

And she’s so right, you should never judge someone over their body type because all bodies are beautiful and there is no ‘one’ type of body that is ‘right’ or ‘good’.

Charli then stepped in, calling out bodyshamers once more:

“STOP BODYSHAMING. ITS NOT COOL ITS NOT FUNNY AND ITS NOT A JOKE ITS DISGUSTING AND DISRESPECTFUL,” she said on Twitter.

In another tweet she added: “I can’t understand why some people think it’s okay to talk about someone’s looks, weight, sexual identity, etc in a negative way,” she continued. “This can be hurtful to not only the person you are making fun of but also the people that look like or identify with what you are saying is a ‘problem.'”

In a final tweet she pointed out: “It’s not that hard to be kind. Words hurt no matter who you are.”

This isn’t the first time Charli has had to speak out about bodyshamers.

In April she rightfully slammed people for the same thing by tweeting: “STOP TALKING ABOUT MY BODY!”

“It’s not your place to tell me if i’m losing weight or gaining weight.”

First off, Charli is just 16-years-old. As teens our bodies are constantly changing and growing and it’s all perfectly normal, and perfectly fine.

Secondly, it doesn’t matter how old someone is, or who they are, someone’s body shape is definitely none of your business. We can feel sometimes that when we follow someone on social media, that we know them, but would you talk about your friend’s body this way? We hope not!

Charli continued: “Why don’t we all just be respectful and understand that we should just be kind and uplift everyone instead of trying to bring others down and I’ve seen these videos about me my friends and complete strangers.” 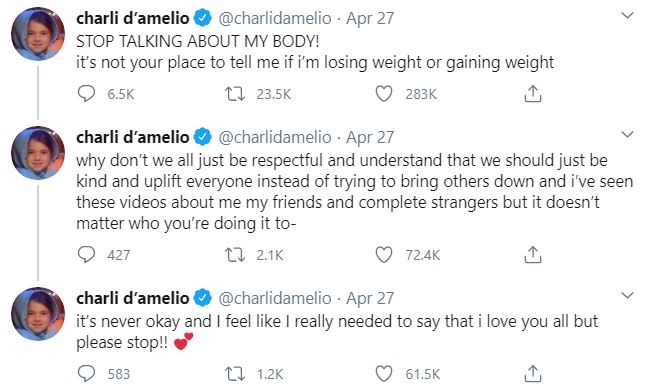 “it’s never okay and I feel like I really needed to say that i love you all but please stop!!”

So if you can take anything from this, it’s be kind to people and don’t shame anyone over their bodies.