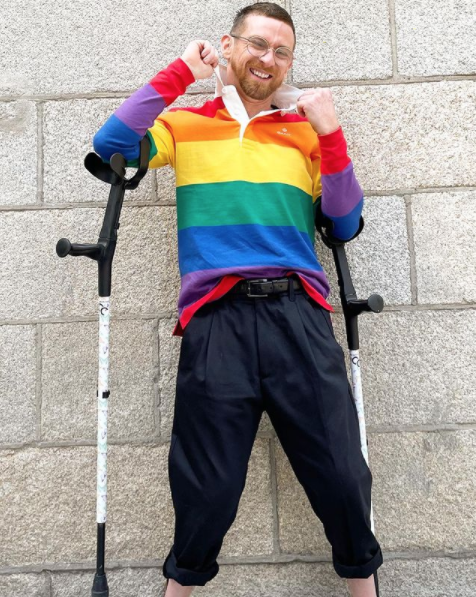 Each week, we chat to some of our favourite well-known people about what they’d say to their teenage self. They get open and honest about what their teens were like and share the advice they’d give for the future.

This week’s letter is from Paddy Smyth. Rising to fame as a contestant on UK reality TV show ‘The Circle’, Paddy entered the series on episode 10 and went on to capture the hearts of the nation, winning the series by episode 22. Since then, Paddy has been paving a career in presenting and activism.

In his letter, he chats about living with a physical disability, coming to terms with his sexuality and diversity in media.

As a teen you were very unsure of my place in the world (mostly because I was physically different to everyone else and couldn’t see anyone in the media that I could remotely relate to). Due to this fact, I was looking for acceptance in every aspect of my life. From my social peers to my family circle.

As a person with a disability, I had this desire to prove to everyone around me that I was ‘worthy of greatness’ even though, I didn’t really believe that myself… Throw into the mix ‘teenage hormones’ and coming to terms with my sexuality (that I was in fact gay) and you have a complex stew filled with insecurities and questions… I was a minority within a minority.

The best part of being a teen was having my best friend Rob Kenny to lean on. We were each other’s rock and as he was coming to terms with being a gay man himself – we had each other to go through it with. I really believe that I wouldn’t be where I am today without him and I’m grateful for that and him. He will always be such a big part of my childhood and how I became the man I am today. Even if we don’t see each other now as much as I would like – I know that we have a friendship that is special.

The hardest part about being a teen was realising and accepting that I will always be seen as ‘different’ to everyone else due to having a visible disability… And that’s okay. I was even seen as ‘different’ to my own Father. I know, he loved me and I loved him – but he didn’t really expect anything from me and that was very hard to come to terms with, but on the other hand it gave me a fire to prove to him and everyone else that they were wrong.

I’ve had to fight harder, clawback and prove myself for every bit of success I’ve got through the years, but that even makes the wins sweeter!! And I’m not finished yet, not by a long shot. I heard this saying once and I now live by it. ‘No one will ever give you a place at the table you have to create your own’ Well I’m creating a NEW TABLE and at this table I I will make room for miss represente talent or for anyone who thinks they won’t be able to ‘make it’ in their dream profession because of how they were born or how they look. That’s bulls*it – Our time is NOW

When you grow up it will all be…. Fine! I will be happy with who I am and I will never stop fighting for what I believe in and for what I want.

What has changed? My confidence and perception of what I can do in this world. I used to believe that my future was very limited and that there was this invisible ceiling that I’d never be able to break through… But now I know that isn’t true and the attributes and qualities I use to be ashamed of and try hide are going to be the key to my continued success

What has not changed? That people with disabilities are not seen as equal but rather victims and are misrepresented by the media time and time again. We need to be represented more in day-to-day life – put us in forward-thinking fashion campaigns or sexy adverts. Not just charity or hospital campaign pushes – I’m sick of seeing the same all the time. We need diversity – We need a change!

My biggest piece of advice to my teen self would be to trust yourself and that you do have a lot to offer even though you think you don’t. Lean into what makes you different and turn it into a positive! You have more to give than you realise and you are going to be a voice for people who don’t feel like they’re never seen or heard.Take that responsibility seriously! But also don’t forget to have some feckin’ fun Hon!!