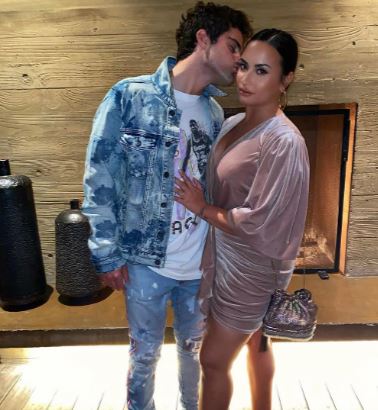 The whole Demi Lovato/Max Ehrich breakup story is happening so fast it’s almost too hard to keep up with.

But don’t worry, KISS is here to keep you in the know.

Just over a week after their split Demi has released a breakup anthem called Still Have Me.

Here are a few of the lines to give you an idea of what she’s saying:

And then: “All the highs are now just lows/But it doesn’t even matter/’Cause I’d rather be alone”

She shared the song on IGTV with the caption: “Music is always there for me…”

Fans and followers praised the song, with over 20k people commenting on the post.

The news of their breakup came on Thursday, September 24, with soruces stating they wanted to spend time of their careers.

Though Max claimed he found out about the breakup by reading about it.

When Max popped the question, Demi shared the news on social media writing: “When I was a little girl, my birth dad always called me his ‘little partner’ – something that might’ve sounded strange without his southern cowboy like accent.”

“To me it made perfect sense. And today that word makes perfect sense again but today I’m officially going to be someone else’s partner.”

A few weeks ago, fans of Demi called out Max for allegedly flirting with other celebs before they got together. At the time Demi said it wasn’t true.

Here’s hoping she is surrounded by wonderful people and is truly looking after herself during this tricky breakup.