When you think of Billie Eilish, one of the first things that spring to mind is her iconic lime green hair roots, next would be her killer voice and athleisure style, but the green hair is definitely up there.

Well, last night Billie decided to pull a prank on her fans and followers, making them believe that she was changing up her famous locks. Sharing a picture on her Instagram story, Billie set the internet alight, showing off her faded hair colour with dye painted over it.

A while later Billie came back to her story, showing fans that absolutely nothing has changed. She looks exactly the same and we all freaked out for literally no reason.

Showing off the finished product of her classic green roots and black lengths combo, Billie said:

“Sooo you thought it was going to be something new?” Billie said.

“It’s actually the f**king same! Gets you every time!” she continued. 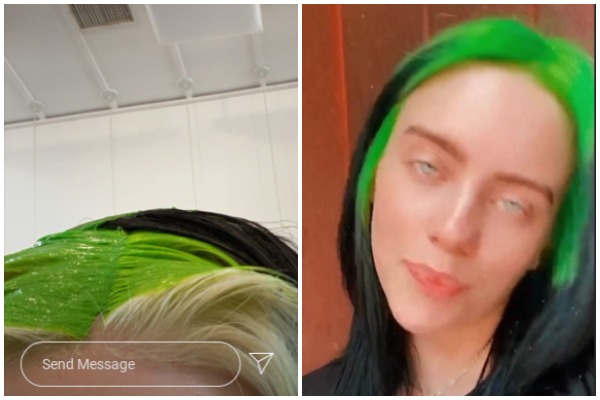 Okay, we’ll admit it, she definitely did get us. But, can you blame us? As Cosmopolitan has interestingly pointed out, we, as a society expect females, and particularly famous females to keep up with society’s beauty standards and change up their looks as often as well, the seasons.

Just take The Kardashian’s, when they’re not dying and chopping their locks, they’re sporting wigs in all the colours in the rainbows – so it’s no surprise that other celebrities are expected to shock us with new looks every couple months too.

But, we’re so glad Billie isn’t feeding into this standard and is sticking to her green and black gruaig. Hey, if it ain’t broke, don’t fix it!

Here’s Why Billie Eilish Keeps Her Love Life So Private