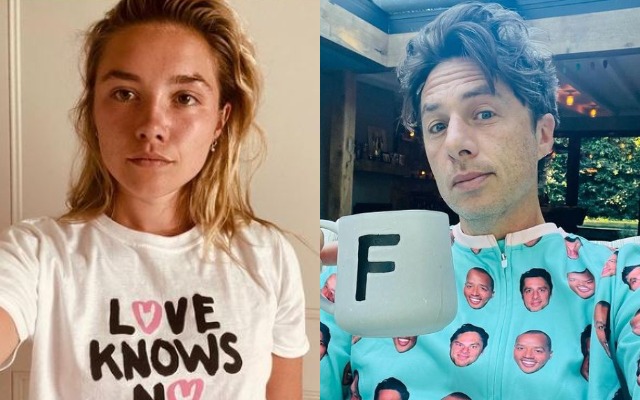 Florence Pugh has taken to Instagram to wish her boyfriend of two years a happy birthday.

The couple who have been dating for two years have faced controversy over their 20-year age gap but Florence has had no problem defending their love.

On Instagram, she shared several photos of him and wrote:

“It’s this magical persons birthday. A year ago we got Billie three days before Zach’s day and she’s flopped on her back for tummy tickles from him like this ever since. A special day for a special fella requires special foot wear and fluffy trackies.. obvi.” she said.

She went on to praise him and list her favourite things about the Scrubs star.

“His need to make people laugh and smile is never ending, his constant generosity and love for others is infectious, his creativity and ability to put real and honest words onto the page inspires many and all who’s around him, but above all.. his appreciation for life and excitement for LIVING is something I always take note of. Happy Birthday chicken, odd shoes is a good look 🌼 @zachbraff.”

Florence has the comments on the post turned off, so we didn’t see a public response from Zach, however he did reshare a photo on his Stories and later posted a pic of Florence and their pup at the beach writing: “Best Birthday.” 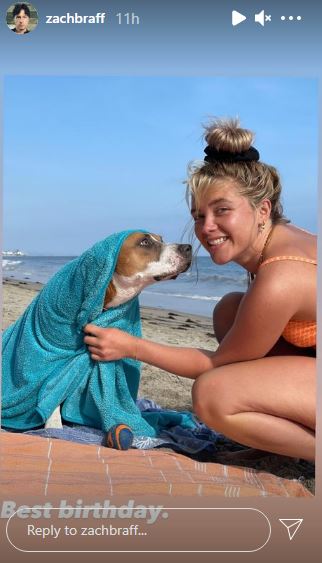 Last year’s birthday post for Zach stirred up some judgement from followers.

In defence of their age gap, she previously told Elle Magazine.

“I have the right to hang out and be with and go out with anyone I want to.”

“I’ve always found this part of what people do really bizarre. I’m an actor because I like acting and I don’t mind people watching my stuff, but people have no right to educate me on my private life,” she explained.

“I know that part of being in the spotlight is that people might invade your privacy and have opinions on it, but it’s bizarre that normal folk are allowed to display such hate and opinions on a part of my life that I’m not putting out there.”

Just last month, speculation arose that the pair had married, when Zach was spotted wearing a ring.

This came after a friend referred to Flo as “FPB” in an Instagram caption, leading people to believe she’s now Florence Pugh Braff.

The caption was then edited and the B was removed.

We’re guessing after all the comments and judgement, they might not be sharing any nuptials with us if and when they do get married!