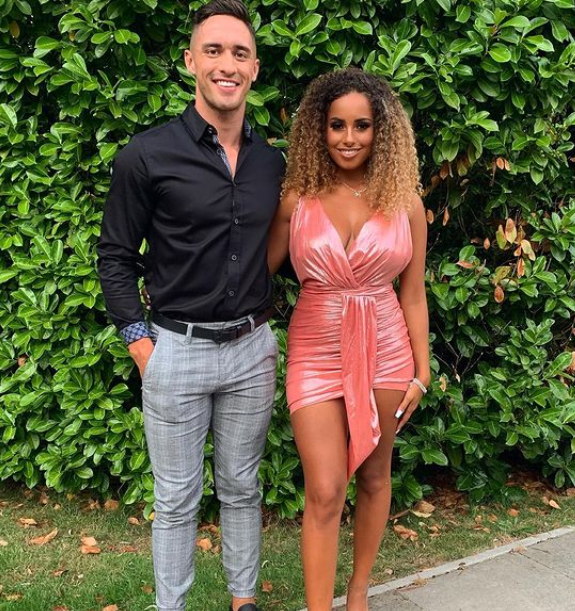 Greg O’Shea opens up about his breakup with Amber Gill for the first time since the pair won Love Island in 2019.

Greg joined the Love Island villa on Day 43 of season 5. In just over two weeks, he coupled up with Amber Gill. And in a whirlwind romance, the pair went on to win the show beating Molly Mae and Tommy to the top prize.

However, just one month after leaving the Love Island villa as winners of the show the couple announced their split.

Now Greg has deatailed his side of the story to Mail Online. He reveals that their split was a mutual decision because Greg wanted to continue his rugby career and training in Ireland while Amber wanted to move to London to collaborate with clothing brands.

The pair discussed their relationship over Facetime and according to Greg agreed to part ways. Greg has revealed that less than an hour later an article was released that accused Greg of dumping Amber over text.

Following these accusations, Greg said that he and his family received both hate mail and death threats from Amber’s fans.

“I rang her and said “what’s the story? Why would you do that? You know that’s not the truth” and she said, “it wasn’t me, it was my people, they just released it” and she didn’t want it to happen. I said, “well it’s happened and now I look like a terrible person,” Greg revealed.

“Her fans, it’s like an Amber army and I can see why because she has everything going for her but when they turned on me it was very scary. I could deal with it because I had the lads around me, but it was very sad for my mother who got so upset. It got brutal for a while.”

Greg lost 600,000 followers in a short space of time. He also admits that the trolling made him realise that the Love Island lifestyle of moving to the UK and signing lucrative brand deals was not for him.

“I was like, do you know what maybe I’m not cut out for this crazy lifestyle, so I tucked myself away back in Ireland and I kept training with the team full time.”

“I went back to the life I had before Love Island so that’s what really helped me to stay mentally strong. But it is really tough, the hate messages are a hard pill to swallow but I think I’ve dealt with it well.”

Despite all the negative trolling Greg admits there are no hard feelings with Amber. “I have nothing bad to say against Amber and in another place and time without all the craziness maybe we could have worked but I had to be realistic at the time and people didn’t like.”

Now Greg has certainly made a name for himself here in Ireland. He hopes to make the Tokyo Olympics this summer with his team and is also training to be a solicitor.

Greg has also taken to Irish TV and Radio, joining Doireann Garrihy for a stint on the 2fm Breakfast Show in 2019 and Muireann O’Connell for rugby entertainment show the Line Out in 2020.

Now the rugby/solicitor in training plans to move to the UK in the hope of landing some more TV deals and perhaps a love interest too!

“If I ended up moving to the UK, I’m sure I’ll be able to meet someone there but I’m really excited about it because nothing’s been happening over the last year.

“I’m thinking about finishing up rugby in the next couple of months and potentially moving to the UK and maybe trying to get back on a TV show like Strictly Come Dancing or I’m A Celebrity- I’d love to do something like that.”

Well, it seems there’s no stopping Greg O’Shea and it looks like there’s lots of positive and exciting times ahead!