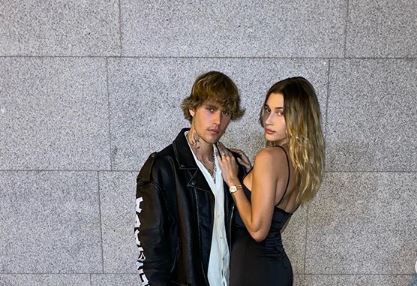 The Peaches singer took to Instagram to share a fab pic of the couple looking their usual cool-selves in black and white.

He captioned the pic: “mom and dad”

This led some fans and followers to believe it was a pregnancy announcement and the pair were about to become parents.

Another added: “Baby on the way?”‘

Hailey quickly jumped in to clarify that the caption might be a tad misleading!

“I think u should maybe change this caption to *Dog Mom and Dad* before anyone gets it twisted 😂” she said.

Though the model’s comment was posted over 24 hours ago, her husband has yet to change the caption, though perhaps her comment has already set the record straight.

Hailey recently opened up about speculations over her being pregnant and how comments about her body bother her.

The star was on the podcast That Was Fun? With Addison Rae and her mom Sheri, where they spoke about being judged in the public eye.

“Women go through so much with their bodies and I feel like people just don’t have any empathy with that,” Hailey said.

“It’s like, well how do you know what is even going on in my body right now? Birth control is wild, periods are wild, what if I’m PMSing?”