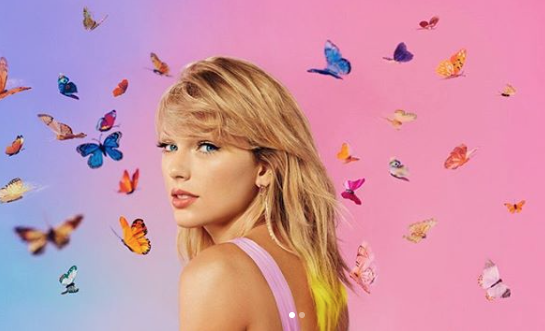 The hashtag has emerged after Taylor Swift posted a lenghty statement on social media about her old label preventing her from playing her own music.

This meant that his company now owns the masters (original copies) of six Taylor Swift albums. This also means, according to Taylor, that they can stop her from performing her own music, since they now own it.

In a statement on Twitter, Taylor alleged that Scott Borchetta and Scooter Braun were preventing her from performing a medley of her songs at the American Music Awards, and stopped her from using other songs in her upcoming Netflix documentary.

She explained that she felt she had no choice but to speak publicly about the issue.

“I feel very strongly that sharing what is happening to me could change the awareness level for other artists and potentially help them avoid a similar fate,” she wrote.

“The message being sent to me is very clear. Basically, be a good girl and shut up. Or you’ll be punished. This is WRONG. Neither of these men had a hand in the writing of these songs. They did nothing to create the relationship I have with my fans.”

Don’t know what else to do pic.twitter.com/1uBrXwviTS

She revealed that the only way Scott Borchetta would allow her to use her own music is if she does not re-record her music. Which is something she planned on doing next year as a way to be able to play her songs again.

She then pleaded with fans and those who felt it was unfair, to show their support.

“Please let Scott Borchetta and Scooter Braun know how you feel about this” she wrote. “Scooter also manages several artists who I really believe care about other artists and their work. Please ask them for help with this – I’m hoping that maybe they can talk some sense into the men who are exercising tyrannical control over someone who just wants to play the music she wrote. I’m especially asking for help from The Carlyle Group, who put up money for the sale of my music to these two men.”

After this, a number of fans and high-profile celebs began to voice their concern and their support for Taylor.

“Scott and Scooter, you know what the right thing to do is. Taylor and her fans deserve to celebrate the music!!” Gigi Hadid said.

Singer Halsey said: “This is punishment. This is hoping to silence her from speaking about things by dangling this over her heard. These people are protected because they inspire complicity with fear. Banking on the illusion that people will not stand up for her. That the world will say she is over-reacting. You’re barking up the wrong tree. It is her grace and patience in these moments that make her the Artist of the Decade,” the singer shared on Instagram.

“I don’t know a lot about what’s going on,” Camila Cabello wrote, “but I will say I really believe artists should own their own life’s work.”