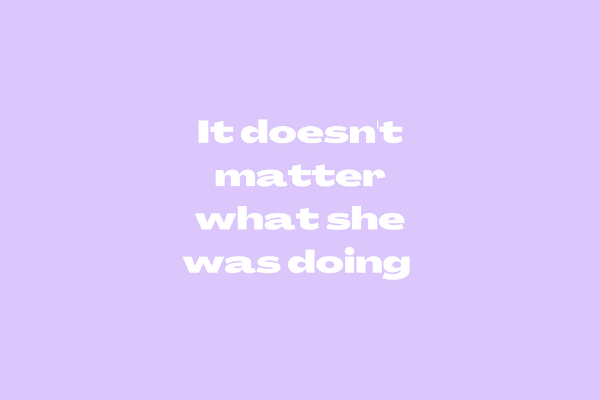 It’s been two days since we first learned about the tragic death of Ashling Murphy.

The 22-year-old teacher was out for a run when she was killed by a stranger.

For many, this news has brought up everything from anger and shock to fear, sadness and devastation.

We won’t try to come up with any answers or say anything about it other that it is heartbreaking and incredibly difficult to even think about.

Since her passing, many people have shared posts with the words ‘she was just doing for a run’ written on them. It’s a way to share our shock and sadness over the fact that she was doing something so normal, something that many of us would do.

However, Laura Bates, founder of Everyday Sexism, has made an important point over on her Instagram, sharing a post that reads: “I doesn’t matter what she was doing.”

This is true, and important. It doesn’t matter where she was, what time it was, why she was there, what she was doing, it should not have happened.

Her senseless killing has nothing to do with her actions, but that of her killer.

It’s hard to even type those words because it just doesn’t seem real that something like this could even happen.

Orla O’Connor, Director of National Women’s Council explained what needs to be done to combat violence against women.

“Women must be safe in our homes and our communities; we need to end men’s violence against women. At the highest level, this requires real political leadership. We need one Government department with responsibility for ending gender-based violence, with a Minister responsible for violence against women sitting at the Cabinet table. As well as greater supports and resources for women who experience gender-based violence, we must make it easier for women to report domestic and sexual violence.”

Orla added: “Ultimately though, we need to focus on prevention. Preventing men’s violence against women starts with creating a zero-tolerance culture towards that misogyny and sexism that creates the context in which gender-based violence occurs. This means, for example, funding and resources for programmes in second and third level education. It means policy change in our education system to ensure the casual sexism that girls and women experience is unacceptable. It means zero tolerance toward street harassment, and always toward harassment in the workplace.”

If you’re struggling with the news, here are some things you can do that might help you or others.

Let yourself be upset

It’s natural to have all sorts of feelings about this horrific incident. Don’t feel as though you need to feel a certain way or hold back on your emotions. Give yourself the space and time to feel everything you’re going through.

The whole of Ireland, and beyond, has been impacted by this, so please don’t feel alone. Reach out to your parents or guardian, your friends, your teacher, or a helpline like texting service 50808 where you can express yourself and feel your very real feelings.

If you can’t attend one of the vigils taking place today, light a candle in your home and think of Ashling and her family.

Take some time away from social media

Putting down your phone or deleting Twitter doesn’t mean you care any less about Ashling or the incident. We can care without reading every single post or news article on the horrific situation. Sometimes over-consuming difficult news only makes us more upset, and doesn’t help.

Charities and organisations you can donate to

Supporting charities that do such hard work every day in the fight against gender-based violence can help to make a difference. Consider donating money or creating an event for the charities listed.