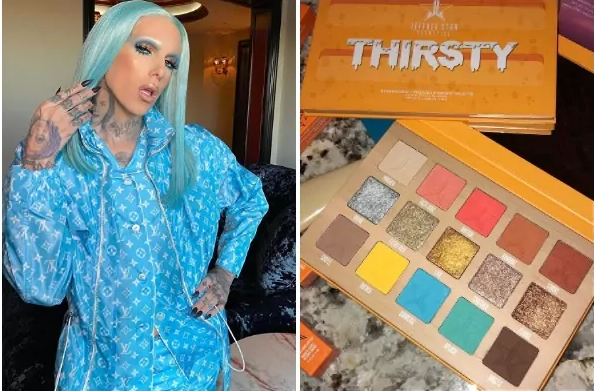 We’re less than 20 days in 2020 and it has been A Year for Jeffree Star. Cancelling his European tour with Mmmmitchel, and announcing that he has split from long term partner Nathan Schwandt, Jeffree has also just announced that he will be discontinuing two of his trademark palettes.

“Yes the rumours are true #JefreeStarCosmetics is discontinuing the Thirsty & Alien eyeshadow palettes!”

Good morning everyone… Yes the rumors are true 👽#JeffreeStarCosmetics is discontinuing the Thirsty & Alien eyeshadow palettes! Time to make room for all the new shit dropping in 2020!

In case you were wondering, the thirsty palette features a number of both warm and neutral colours, with a canary yellow and neo-mint giving it that Jeffree trademark pop.

While the Alien palette features a mix of mattes and metallics in a number of both neutral and statement shades – that royal purple tho’.

However, it’s not all bad news, as Jeffree shares the reason behind discontinuing the palettes is because he wants to make room for more palettes which will be dropping throughout the year.

Fans were still understandably outraged by the news, and immediately began to hatch plans to track down the last few remaining palettes in existence. Which is an absolute challenge and a half, consider neither Beauty Bay, Morphe, Or Jeffree Star Cosmetics have a single palette in stock.

The Alien Palette was in the top 5 for best JSC eyeshadow palettes. It was the only thing I was looking forward to as I was going to order it for my birthday whenever it got restocked. 2020 sucks already and everything is dead. pic.twitter.com/qiI9KPW8vW

Did you manage to get your hands on either of these palettes?