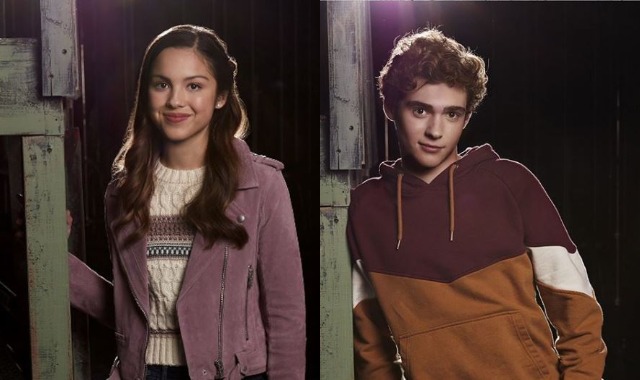 If you’ve been enjoying High School Musical: The Musical: The Series on Disney+ you’ll no doubt be obsessed with Nini and Ricky.

KISS was lucky enough to sit down (virtually of course) with the actors who play them.

We chatted to Joshua Bassett, Olivia Rodrigo and creator Tim Federle over video recently to hear all about the show.

Joshua and Olivia spoke to KISS about writing their own songs for the show, their favourite part of filming, and how they are very like the characters they play.

What was the audition process like for you guys?

Joshua: So when I was eight years old, I decided to do theatre. And the show that my local community theatres putting on was High School Musical, because they had already adapted it into a stage musical. So I auditioned I got the role of JV jock #2, and that actually sparked my interest in musical theatre for the long run.

And that led to doing more shows and more shows and then eventually when I was 17, the project came about. And one of the coolest parts about the whole audition process was, I think right before my final audition, Tim (Federle, the creator) had mentioned that he had found some of my original songs on Instagram, and he asked if I would play one of my songs in front of all the executives and potentially write music for the show. So that was mind-blowing. So I ended up singing one of my songs and then, later on, Olivia and I got to write a song for the show [called Just for a Moment]. So that was a cool process and very, very awesome that it came full circle with the fact that my first show ever was High School Musical.

Olivia: Yeah, I remember going in, I think I met Joshua, maybe my first or second audition. And I remember we sang a cover of Count on Me by Bruno Mars. I was a really magical process. And I just remember thinking that wow, this is a really special project. And even if I didn’t get to be a part of it, if it didn’t work out, I was really lucky to be there.

The show is pretty huge, do you feel super famous yet? And do you think things will change now that you’re going to be recognised?

Joshua: That’s always a fun question. Because, in a way, things have changed, and they will probably change. And then in another way, nothing has changed at all. You know, your day to day is kind of the same. I mean, you see numbers on the internet, but it doesn’t really translate to the human mind. But, It’s very exciting. And Disney is obviously an incredible place and to be able to have the platform that they’ve given us is so exciting.

Olivia: I’m just so lucky to be doing what I love every day. And I’m so happy that people are resonating with the stories that we’re telling. But like, I feel at the end of the day, I’m still just like doing algebra in my bedroom. You know, like, that’s just me. So I don’t think our lives are gonna change drastically.

It seems like a really fun set, where everyone gets on, what was the best part of making the show?

Olivia: The music is probably one of my favourite aspects of the show. I love how we sing the songs from the franchise. And then we also do new ones, it’s just amazing. But I think my favourite part is the people that work on the show. They’re just the best group of people that I’ve ever met and I constantly go to set feeling safe and welcomed and loved and like creatively challenged, which is so cool. I know I’m gonna remember these people for my whole life. This is like my high school experience and these are like my high school pals.

Joshua: Yeah obviously the music on the show is amazing especially when we get to do it live. I think people don’t really realise how musically driven the set is. In general, I get in trouble all the time for playing the piano when I’m not supposed to but like the piano in the rehearsal room is real and my guitar is always on set and people are always constantly playing stuff. Joe Serafini (Seb) will play this beautiful ballad on the piano out of nowhere when we’re getting our makeup touches done or Olivia and I will go over and sing a duet and throw around ideas. So that probably brings me the most joy from it. It’s just that there’s so much music involved and so much love and what Liv said, the crew is just the kindest crew in the world. I’m like, gonna get emotional… it’s a really wonderful environment and a really safe space. And I miss it a lot.

Are you similar to your characters of Ricky and Nini?

Joshua: Yes! Tons of similarities. When I read the description, I was actually worried I was being stalked, because they kind of nailed it. I always tell this awesome story of the time when I slept in, alarms never went off, and I was basically a little over two hours late to set. And everyone was waiting for me and it was the most horrifying moment of my entire life, it was awful. And I got to set and then I realized that my character description says; ‘most likely to sleep through his alarm’. And so I go up to Tim and I’m like, Tim, you can’t be mad that I was late… I’m just getting into character!

Olivia: I think that I’m really like Nini a lot. I think that Nini is so well written as just like a teenage girl that’s growing up and finding herself amidst all of this craziness. And I think that I was just totally a teenage girl trying to find a place in the world to while I was filming it, I remember was really easy to write ‘All I Want’ because I drew on my own experiences with romance, like when you’re 16 and dealing with boys in high school, so I drew on a lot of my experience to write that song. And I think that just goes to show how relatable the character is to me and I think a lot of other girls.