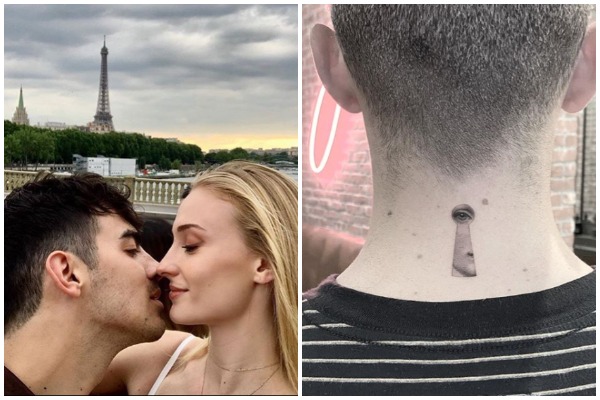 Getting new ink is pretty normal for celebs right? Right. Just yesterday Joe Jonas’s Tattoo artist took to his social media to show off his latest work on the superstar, something that now has the entire internet talking.

In the picture, Joe can be seen showing off the latest addition to his body art collection – except, it looks a little familiar?

The tattoo is of a keyhole, with a woman’s eye and lips peeking out of it. Only, the eyes and lips like exactly like a certain Mrs. Turners. Upon seeing the picture, fans immediately jumped to the conclusion that Joe had gotten his wife’s face tattooed on him in tribute to her, and we have to admit, they’re probably not wrong.

Although Joe and Sophie are yet to confirm or deny the news, the resemblance in the picture is pretty uncanny. So, fans immediately took to the comments section to share their thoughts and theories.

“If this is in reference to Locke and Key and that’s Sophie’s eye meaning she’s always in his head this might be the cutest f*kin thing,” one said.

Getting a tattoo of your significant other probably isn’t always advisable, but that doesn’t exactly stop the celebs from doing it. Just last week Brooklyn Beckham made headlines for his recent ink. In a picture shared on his Instagram page, a pair of tattooed eyes can clearly be seen on the back of his neck. Similar to Joes, the eyes seem to bare a resemblace to his Fiance’s, Nicola Peltz.

We’re not sure if both Sophie and Nicola have returned the favour and sat to get their men inked on their skin too, but we suppose it’s only a matter of time.