Demi Jones has shared an update with followers after her cancer diagnosis.

The Love Island star had to undergo surgery this week to have her thyroid removed.

“Just waiting to head into surgery now to have my full thyroidectomy to remove anymore cancer on the gland.

“Feeling a bit anxious today, as I’ve got to be in for a few days, but I am a tough cookie. See you on the other side.”

Hours later, she shared another update to say that she had woken up from surgery but sadly was in a lot of pain.

“I’ve just woken up. Pain is so much worse this time. I’ve been asleep for hours, nurses struggled to wake me up.” 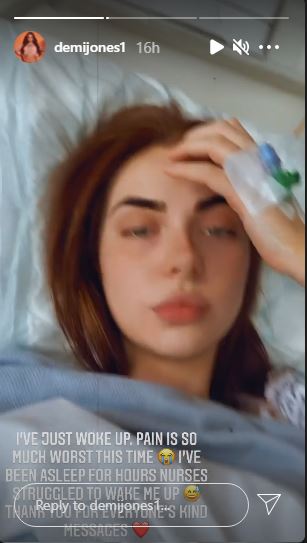 “Thank you for everyone’s kind messages,” she added.

We’re glad to see she’s doing okay and hopefully she has a speedy recovery.

Demi previously opened up about how she almost missed her cancer diagnosis.

She told The Sun that initially she’d be told by docs that the lump was harmless.

Demi explained that she pushed for further tests and found out that it was in fact thyroid cancer.

She said: “If I’d listened to the doctors then I might be sitting here now not knowing I had cancer inside me.”