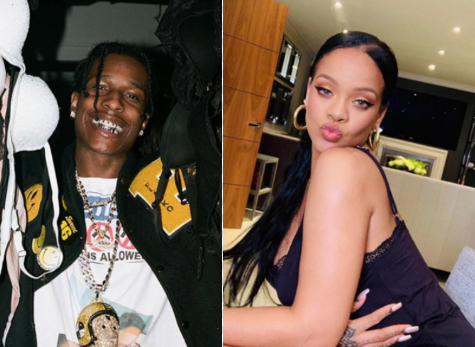 Usually we knows a lot of details about celeb couples. Okay, maybe not a lot, but some. But Rihanna doesn’t seem like the kind of gal to flaunt her relationships, she tends to keep that side of things to herself. Although we knew that she was in a three year relationship with Saudi billionaire Hassan Jameel, they recently split. While the couple were extremely private during the past three years, they were spotted out and about together. Now, a source has told The Sun that Rihanna has moved on, with no other than A$AP Rocky.

So, about a week ago the two were spotted together backstage at the Yams Day Benefit concert in New York. Pretty innocent, right? But the internet went into meltdown. Since then,The Sun has been told that the pair are dating.

“They shared a hotel suite during that trip in New York,” a source said. “However, Rihanna is reluctant to put a label on it as it’s so soon after Hassan. They’re really enjoying each other’s company and taking things easy as it’s still early days.”

“It’s really casual between them and she’s not thinking about whether there’s a future with Rocky,” they continued. “She’s a newly-single girl having fun.”

While we have no info of why Rihanna and Hassan broke up (which makes sense, ‘cos their relationship was so private), we can’t exactly forget that Rihanna and A$AP Rocky were seen kissing off screen when filming a music video together back in 2013.

Either way, Rihanna isn’t the type to confirm anything when it comes to her love life, so we won’t be expecting a definite answer any time soon.