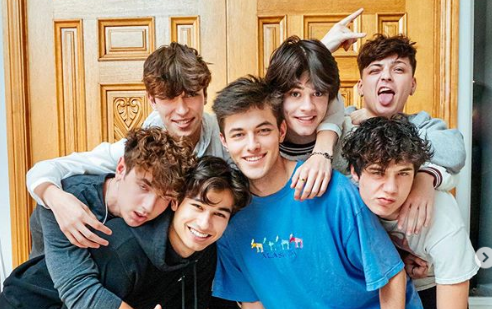 Hype House, Club House, Sway House, so many Tik Tokers, so much drama. It can be hard to keep up with the who’s who of the Tik Tok world. So we’re taking a look at the Sway House and finding out what these cheeky boys are about.

The Sway House is like the frat house of Tik Tok, all boys, who all love the camera and are all about the drama. The boys aren’t afraid of being controversial and have shaded the Hype House in many a video, not to mention their recent claim and diss track about Chase Hudson (lil Huddy) cheating on Charli. Yikes.

So, who are these guys?

The 18-year-old Canadian native is an actor and social media star. He is also the one who accused Lil Huddy of DMing his girlfriend Nessa Barret and made a diss track about it. Clearly not shy about confrontation, he even watched the video live with Lil Huddy and filmed it.

Sound familiar? Yep, is was the ‘are they/aren’t they’ guy friend of Addison Rae, the two would flirt and even kiss on camera but always denied dating, cheating rumours and diss tweets followed and we haven’t seen these two together since. Bryce is 20 and also features on the Lil Huddy diss track. Bryce calls himself the “life of the party” and is always pranking his friends on YouTube.

18-year-old Tik  Tok star Anthony from Kentucky is next. He and his gf Avani are couple goals on each others Instagrams even though they belong to two different houses, yep Avani is in The Hype House. There doesn’t seem to be any bad blood between Anthony and The Hype House so all is good here!

19-year-old Jaden used to date influencer Mads Lewis, although they ended in early 2020 they have been seen together since, they haven’t confirmed a reunion. Jaden also sings and has a new single coming out that he teases on his Instagram named Angels and Demons.

The second oldest member of the group, Griffin has appeared in Brats web series Attaway General alongside The Hype House member Dixie D’Amelio. He is popular on Tik Tok for his comedy lipsyncs and vlogs and also has an Instagram for his dog diesel! So cute!

Another Canadian member of the house, Kio is 19 and has 1.1 million Instagram followers. He is dating Instagram model Olivia Ponton and posts the cutest pictures of the pair on his ‘gram.

Finally, we have the oldest member of the group. Nick is 25 and started out on youtube with a collaborative group named Our Journey and then went on to make his own YouTube channel which now features a lot of content with the other Sway Boys.

Wow that’s a lot of names. The Sway boys are very active on all socials and aren’t shy to have an opinion on any drama. We are sure their names will pop up on our site again soon.