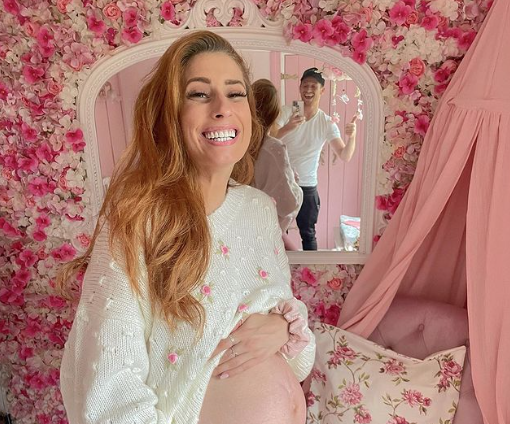 While the world waits for Stacey Solomon to reveal the name she called her baby daughter, the 32-year-old has shared the one name that she’s definitely ruling out.

Taking to her Instagram stories to update her 4.7 million followers, Stacey shared that she and Fiance Joe Swash had decided on a name, before realising what her initials spelt out.

“We loved the name Autumn but then we realised her initials would be ASS” – her name being Autumn Solomon-Swash.

“So it helped us rule out all of the ‘A’ names”

She added that the couple had other names chosen that they were trying out on the newborn. Stacey revealed on her stories today that they had finally settled on one and is excited to share it with everyone.

“We’ve chosen her name. We’ve been calling her it and a couple of others for the last few days and this one just feels like it is definitely who she is” she began.

“We are going to chose her middle names while we walk in the garden and then I can’t wait to share it with you.”

Since the tiny tot was born last Monday, which also was Stacey’s birthday. She has been sharing life updates as the mum of a newborn, from introducing her to her older brothers, to her struggles with breastfeeding.

So, it looks like we’ll have to hold out just a tiiiiny bit longer to find out what her name is – but we know for sure it won’t begin with A!