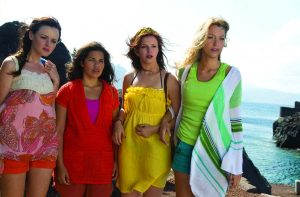 It’s officially summer now! Although thanks to our glorious Irish weather you wouldn’t exactly be able to guess it.

Right now it might seem like those sun loungers will never leave your shed, and your swimsuits will have to stay in your wardrobe, with all the rain, hail, and even thunder and lightening we’ve been getting.

But luckily, we’ve figured the perfect pick me up, with the best films to get you in the mood for summer. Let’s face it we all need a reminder of what the sun looks like and what better way to jog our memories than watching Amanda Seyfried sing ABBA while dancing around a Greek Island or seeing Kate Bosworth hitting the waves.

Plus who knows maybe watching all that sunshine might manifest a few rays into our own lives!

Who doesn’t love watching Meryl Streep, Amanda Seyfried, Pierce Brosnan, and Colin Firth running around a Greek Island singing? The film follows Sophie as she prepares for her wedding and invites three of her mum Donna’s former flames in an attempt to find out who her father is.

You’ll laugh, you’ll cry, and you’ll even sing too. It’s a jukebox musical featuring the songs of ABBA. And seeing as the band just made a triumphant return to music, now is the perfect time to watch. And as a bonus, there is a sequel which is just as good star Lily James and Cher. What more could you wish for.

Everybody loves a good case of mistaken identity film, and Monte Carlo is one of the best. Starring, Selena Gomez, Leighton Meester, Katie Cassidy, Cory Monteith, and Andie MacDowell. The film follows Grace (Gomez) as she travels to Paris with her best friend and step-sister, only to be mistaken for a wealthy heiress and whisked away to Monaco. The film is fun and light-hearted, and feature the stunning weather of the Mediterranean.

The Sisterhood Of The Travelling Pants

Based on the hit book series by Ann Brashares, The Sisterhood Of The Travelling Pants is a classic and for good reason. Starring America Ferrera, Amber Tamblyn, Blake Lively, and Alexis Bledel, it follows four friends as they spend their first summer away from each other but stay in touch thanks to a magical pair of jeans.

Okay…it might sound a bit out there but firstly the jeans fit everyone that’s what makes them magic, it isn’t a film about talking denim so no need to worry. Secondly it features some much needed scenes of summer weather as the girls each spend their summer somewhere different. With Carmen visiting her dad in another state, Tibby staying at home, Lena staying with her grandparents in Greece, and Bridget going to soccer camp in Mexico. Great story, and great sunshine displays, it’s a 10/10.

You’ll practically be able to smell the sun cream watching this one. Starring Kate Bosworth, Michelle Rodriguez, Sanoe Lake and Mika Boorem, it follows Anne Marie as she raises her little sister with her two best friends and attempts to get back in to surfing after a big accident.

It’s got it all action, drama, friendship, family, and romance. But most importantly it puts the sun on display and will definitely get you excited for better beach days.

Hey now, hey now, this is what dreams are made of. Starring Hilary Duff, Adam Lamberg, Robert Carradine, Hallie Todd and Jake Thomas. It follows Lizzie as she heads to Italy for a school trip, only to get mistaken for an Italian popstar while in Rome.

It’s the ultimate throwback, and the ultimate summer flick, Lizzie’s adventures in Rome are sure to put a smile on your face and the brilliant Italian weather might just make you forget about the rain.