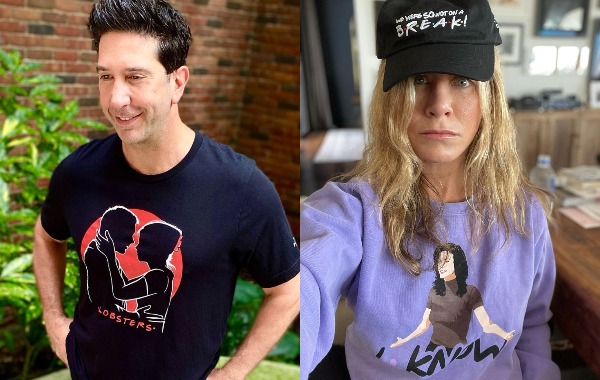 Well, it only took them a solid 27 years, but the cast of Friends has just launched a line of Friends merch, and we don’t even know where to start with it all.

Sure, we’ve seen places like Penneys, Aldi and New Look releasing Friends collections over the years, but this one is the first that’s connected to the actual cast in an official way.

After the world was re-bitten by the Friends bug earlier this year, it seems the cast and producers gathered this would be the perfect time to flog some bits, and so have swiftly launched a line of commemorative apparel and accessories.

However, the launch comes with a slight catch, that being that its limited edition. The collection will be released in three separate drops over the next nine months, each of which will be available for purchase for four weeks.

Of course, the idea behind the merch isn’t just to line their own pockets, a portion of the proceeds will be going to charity, with each cast member choosing one that’s close to them.

Over on Instagram all six stars were sharing their favourite bits from the collection to announce the exciting news, with things getting a little political quite quickly.

Defending herself, Jennifer shared that she’s still firmly team Rachel, sporting a cap that reads: “We were SO not on a break”.

But Lisa revealed that her alliances lie firmly with Ross, donning a t-shirt stating that the infamous couple were indeed on a break.

Here’s the rest of the cast showing off their favourite pieces.

Can we take a moment for David’s Lobster t-shirt!

Check them all out here.