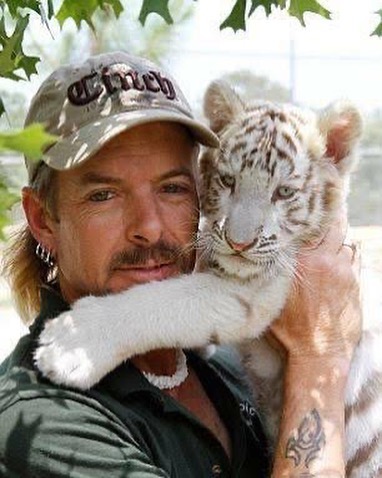 Now that March has rolled around, so too has the conversation about Tiger King. This time last year, when we had just entered our first lockdown, it was all anyone could talk about. Now, a year later (and in lockdown once again) we have learned that a new show on the topic is on the horizon.

If you’re in need of a bit of a refresher, the eight part program was released on Netflix and followed the life and career of Joe Exotic who kept wild cats in his ‘sanctuary.’

Everyone’s favourite documentary maker, Louis Theroux had also made a show about the eccentric animal tamer back in 2011. Previously, Louis covered the subject of wild animals in captivity in his documentary, America’s Most Dangerous Pets.

In the show, he covered a number of different personalities who kept a variety of exotic animals, especially big cats, one of which was the now infamous Joe Exotic. Now he has revealed that he plans to revisit the topic.

So what can we expect from this new doc?

The feature length film from BBC has a working title of; Louis Theroux: The Cult of Joe Exotic, and will see him returning to a subject he first covered ten years ago. Louis has shared that this new program will delve deeper into the character of Joe Exotic, exploring how he became such a media sensation.

Speaking about the new documentary, which is set to include lots of never seen before footage, Louis said; “I spent eight or nine days filming at the park back in 2011, over the course of three separate visits. I’d forgotten how much we shot until I went back into the footage during lockdown.”

“It’s extraordinary how much was there. Since then the story just got stranger and bigger, and in going back at the end of last year I uncovered a real-life drama that took me in directions I never could have expected.”

Joe, who’s real name is Joseph Maldonado-Passage, is currently imprisoned after being found guilty of 17 federal charges of animal abuse as well as attempted murder for hire of Carole Baskin. He is currently serving a 22 year sentence.

Louis shared that the new doc will also look at the team who are currently trying to get Joe released from prison, some of which will be speaking on camera for the very first time.

He shared; “This is one of those quintessentially American stories, taking place in the heartland of Oklahoma, with a cast of characters almost too colourful and larger-than-life to be believed.”

That was certainly true of the Netflix show, so we can’t wait to see this.