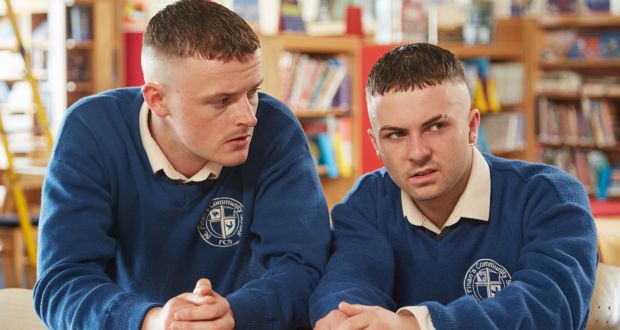 The second series of The Young Offenders has landed and fans of the first season or the film of the same name won’t be surprised to find that it’s absolutely hilarious.

The boys have some growing up to do in this season, as Jock gets ready to become a dad and Conor eagerly sticks by his side for support.

KISS caught up with the actors who play Conor and Jock – Alex Murphy and Chris Walley – to chat about the new series. They told editor Megan Roantree all about their teen years and what they were like in school. In turns out the lads, who are both in their 20s, were quite a bit like their characters, both admitting they got up to some ‘harmless’ antics in school.

“It was actually a pretty harmless thing to do, it was the class photos. I just got into every single one for the whole year and dress up as different people with my friend,” he revealed. “Then the photographer had to come back and redo them all. I told my mom but she didn’t even [mind].” Chris said while Alex giggled.

The boys also admitted their first kisses were pretty awkward, as most people would say! When asked to describe them in three words, they came up with things like ‘unromantic’ and ‘great technique’.

“I try to forget it but now it’s in my head again,” Alex laughed.

Among their celeb crushes, Chris says that Ellie Goulding and Emma Stone were top of his list. But as a child he had a much more questionable crush. “When I was a kid, when I was very young. My mom would ask me, joking, who was I going to marry, and I’d always say Cruella De Vil.” Hhmmm.

Alex, who is a clear Harry Potter fan, says Hermione was his number one.

When asked about advice they’d give to their teen selves, Chris explained why he wouldn’t give any at all.

“I always think about this, I wouldn’t give any advice because I think if you someone advice they try and change things. Everyone just wants to see you mess up and see how you are for yourself so to be honest, I wouldn’t offer any advice,” he said.

Alex agreed saying: “I wouldn’t give any to myself but I suppose if a younger person asked me, I’d just say be nice to people and they’ll be nice to you. And be sound, that helps a lot!”

Check out the full interview below, in which they chat about the show’s huge success, filming sad scenes, and other awkward teen moments.