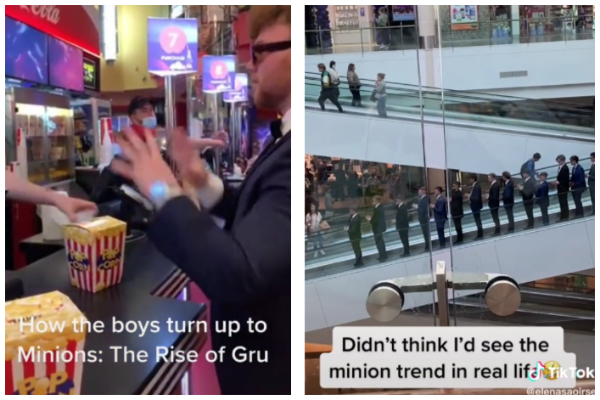 If you’ve been on social media lately you might have noticed a pretty hilarious trend doing the rounds. People are wearing literal suits to go see the ‘Minions: The Rise Of The Gru’ movie.

The trend has risen from a group of people who call themselves ‘gentle minions’. The idea is that a group of friends, mostly male, will rock up to the cinema in their finest attire and ask for tickets to a movie that is very much not the vibe of their dress code.

The trend originated in the US but has since made its way to our shores. There has been some hilarious #content that has emerged from the trend in Ireland.

But, the trend may be short-lived, as cinemas around the world have begun to ban people from showing up in their Sunday best.

One place in the UK went viral for hanging up a sign refusing entry to anyone participating in the Gentleminions trend. Their reason for this is because they claim that the audience has been disrupting the viewers.

Thoroughly entertained by this sign @ODEONCinemas and then saw a bunch of kids in suits refused entry! #gentleminions pic.twitter.com/zo7seJ5COl

Videos on TikTok have showed Gentleminions clapping, chanting and standing up in the screen while the film plays, causing upset for other guests.

As for Ireland, wearing a suit to the cinema has not yet been banned, so for now if you’re heading to see the flick you might expect to see some chaos in the screen.