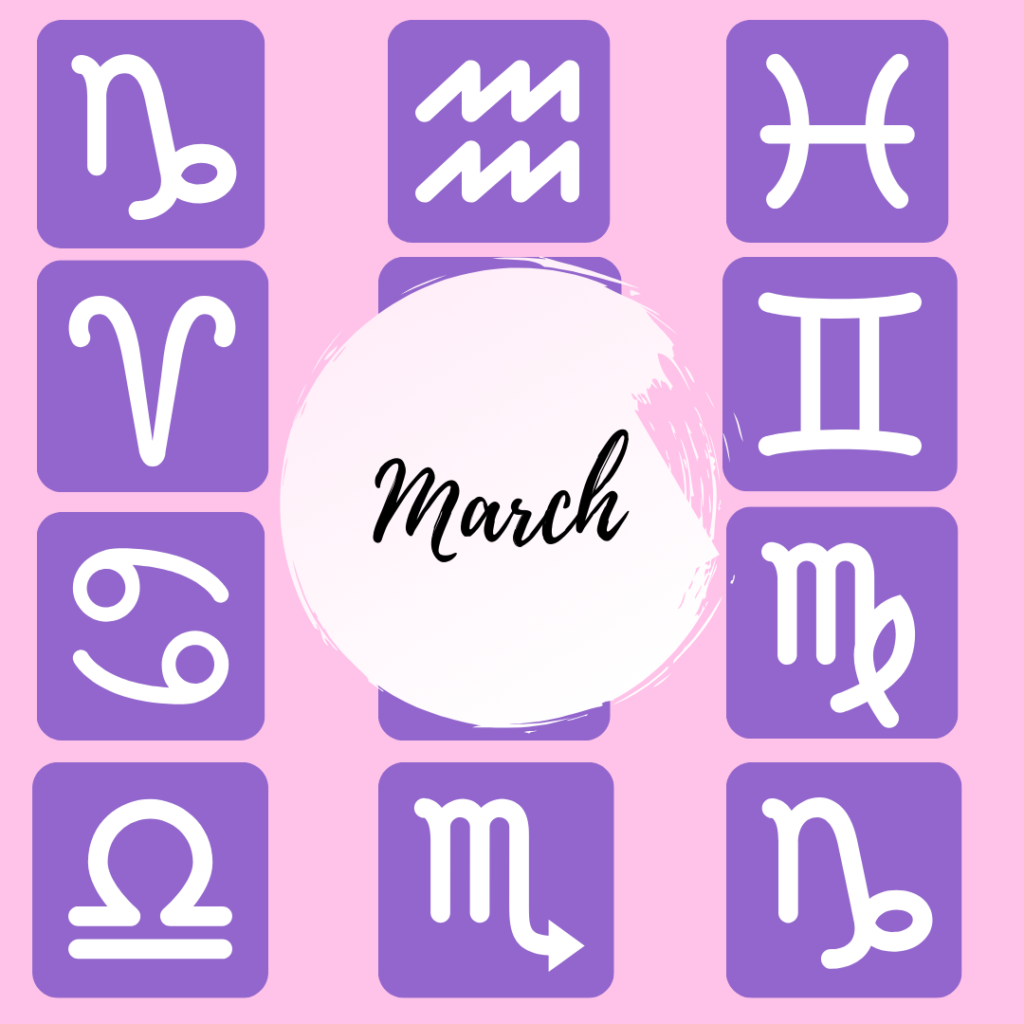 Okay, how has it been a whole month since we last checked in on our horoscopes? While January felt like it was a solid 400 days long, February has gone at the blink of an eye.

Although being honest, we’re not all too sad to see February go so fast. It’s March now, which means spring and summer are just around the corner. We can already smell the scent of barbecues, and our skin is most definitely craving a little warmth.

While we await the highly anticipated arrival of the new season, here’s what the month might have in store for us all.

Most Compatible With: Taurus

The year is going at light speed for you, and maybe it’s time to slow things down. You’re an overachiever, that’s for sure, but it’s important not to burn the candle at both ends. Your social life is busier than ever, and juggling that alongside school and everything else you has going on is a near-impossible task! Take the beginning of this new month as an opportunity to stand back from the mayhem going on in your life. It’s important to prioritise, this doesn’t mean you have to compromise, however, put a hold on some of your plans and take time out for some you time, come April you’ll be a new person.

You’re positive and cheery and that’s the best thing about you. Others might try to bring you down with negativity, but it’s important to never change for anyone.

Last month was a good month, and this one is looking like it won’t be any different. Believe in yourself and you can achieve anything.

A situation might be getting you down at the minute. Don’t beat yourself up! You’ve tried your best and that’s all you can do, onwards and upwards!

Your loyalty towards others is something that can’t be broken, and everyone around you knows that. You’re the best friend anyone could ask for and this month will prove that.

Give yourself a big pat on your back this month, Leo. You’ve been excelling in everything lately and it’s time to reap the benefits.

You’re craving the feeling of warmth on your skin and sand between your toes. It might only be March but summer is most definitely on its way. Carry on grinding in the meantime and summer holidays will be upon you in no time.

You’re cool and calculating and that is sure to pay off this month. Situations will test you but remember to remain your laid back self, all will be fine in the end.

You’re feeling a little disconnected from your friendship group lately and you’re starting to feel it. Sometimes people outgrow one another and that’s perfectly fine.

An important conversation needs to happen, and it needs to be sooner rather than later. You’ve been dodging it for long enough, now get to it girl!

You’ve been doing the same thing over and over again for long enough now, it’s time for a change-up. Picking up a new hobby would do you the world of good.

You’re chatty by nature and that’s great, but maybe it’s time to reign it in just a little. Keep your head down and focus on school work for the next month and you’ll sail through April.